I like to use the analogy of a brie ripening like a banana. It may seem an odd comparison but as you read on it may become clearer…

Before we start comparing this cheese to one of my favourite fruits, we first need to understand what the white rind is on the outside of a brie or camembert.

I often get ask to bring a cheese platter to a social gathering (no surprises there!) and this is how a conversation can go:

Guest: “Great cheese platter. I don’t eat mould though – so no blue cheese for me”

Guest completely devours the Brie or Camembert – and I let them while watching with amusement.

Me “Yes, and what’s the rind made of?

Yes – Brie and Camembert has white mould on the outside. Without white mould we would not have the amazing luscious creamy texture and richly developed flavour of a Brie or Camembert – instead we’d have something like a feta. It’s time to embrace the mould!

Because we’ve eaten cheddar for so long in Australia, we have thought that soft cheese is younger cheese and hard cheese is older cheese. It’s the opposite with Brie.

A young banana is chalky, firm, acidic, unbalanced and not fun to eat. A young Brie or Camembert is exactly the same – it’s quite firm and not delicious at all.

The white mould around the outside of the cheese is responsible for ripening it by softening the texture and developing the flavour from outside in.

Eventually a banana ripens to become really soft, fermented and a bit mouldy on the outside. This is when a lot of people make banana breads and cakes from it.

In the same way, a Brie or Camembert will ripen to become quite strong and runny – and the white rind will become mottled with earthy tones. I suggest at this point to cut the lid off the rind to create a ready-made fondue and dip into the gooey centre with crusty bread.

The time it takes to ripen a cheese depends upon the size of the cheese, the milk variety used and the season. On average a 200g cheese takes approximately 12 weeks from when its first made to becoming super ripe.

How does this magical mould work?

One of the by-products of this is ammonia – and its for this reason that when white mould cheese is really ripe it can be ammonic. I find that it is usually in the rind – and another reason to cut the rind lid off and just dip into the gooey paste.

And finally, how should you serve it?

When serving cheese always ask yourself – is this a cheese with mould or maturity? If so, treat it like a red wine. You wouldn’t serve a red wine cold, and you definitely don’t serve a moulded or matured cheese cold. Think of butter – always best eaten at room temperature for a creamier texture, enhanced mouth feel and developed flavour.

Its best to get your cheese out of the fridge a few hours before you need it. But I’m a realist – sometimes you just have a craving for an immediate taste. A sneaky trick is to put it in the microwave on the lowest setting for short bursts to bring it to room temperature. Not as ideal as just getting it out a few hours earlier, but certainly better than eating it cold. 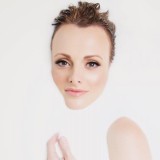 Sheree Sullivan moved from the keyboard to the cheese board when she was instrumental in setting up the Udder Delights cheese factory in 1999 after completing her Bachelor of Music, Jazz Piano, at the University of Adelaide's Elder Conservatorium. She has since become the accidental entrepreneur who has built the family cheese empire while juggling businesses and brands, family and kids, and risks with rewards. She values sustainable community - she grows local, makes local, employs local, lives local and gives local; and has a savvy and sassy approach when putting good food in front of the punters.
The Ponderings of a Cheese Queen
Brie. Camembert